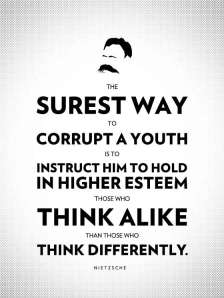 The incarnation has historically been the doctrine of the divine overtaking the human form in the person of Jesus and using this medium to exact divine revenge and quench the thirst for the apparent ontological masochistic necessity that the God of the Bible seems to display. The recent History Channel Series on the Bible shows at least this much…but let’s ask a few questions:

What sort of God is this that takes over our way of being, the form of our human flesh, and uses it to appease his own ineptitude of not securing a tree in the Garden that would not be violated?

Could we not have saved our flesh had this God not created this obvious temptation?
This is what a pervert does and this is the practice of perversion. The pervert sacrifices the innocence of another person in order to gain something from them, typically sexually. Sex and violence have always been partners, even when it comes to ideas of salvation.

How useful is a doctrine of the incarnation if it is continually used to reinforce a theology of perversion and furthermore place the object that it sacrifices, humanity, into the debt of the God that asks for the sacrifice, while simultaneously setting it up? This is the string that is attached. Christ has died, and in this required death, we are in debt, even though God does not need our currency.

If this is the case, than why require the currency of flesh? Sigmund Freud was right, we do owe death a debt. Only the debt we owe, as so finely articulated by Zizek above, is the debt of our being, our flesh, because the Christ figure has given us his being, his flesh. There must be an alternative way.

For Zizek, questions of divine culpability go to the heart of the Christian God.

Zizek writes, “God as omnipotent is a perverse subject who plays obscene games with humanity and His own son: he creates suffering, sin and imperfection, so that He can intervene and resolve the mess He created, thereby securing for himself the eternal gratitude of the human race.” He later asks, “For which authority above Himself – is God himself forced to sacrifice his son?” (The Fragile Absolute, 157-158). For this reason, Zizek argues for a radically different approach to a doctrine of the incarnation than may be found in Athanasius’ De Incarnatione. Zizek spots the perverse core of Christianity, and in so doing the pervert Christianity historically calls God, and calls for the forging of a new direction not located in transcendence.

Zizek’s questions are strikingly difficult, emotionally stressful and piously challenging…yet the questions remain despite our incessant need to hide behind the pages of scripture that actually raise these questions through an honest reading of text.

For Zizek, the incarnation is not a statement about the importance of transcendence, but a statement about the importance of the body, the immanent reality of living people caught in living structures of truth seeking and fulfillment. God needs the world and drains transcendence in the process. Jesus, known as the Christ, is the desublimation of the transcendent God of Judaism. Judaism could never bring God to where it was/is, thus it negated any sort of anthropomorphic identity to the Supreme Creator. Zizek argues that this negation of anthromorphic concepts, however, necessarily places Judaism on the road to making God man, on the road to Christianity.

Zizek describes it thus,
“it is the Jewish religion which remains an “abstract/immediate” negation of anthropomorphism, and as such, attached to, determined by it in its very negation, whereas it is only Christianity that effectively “sublates” paganism. The Christian stance is here: instead of prohibiting the image of God, why not, precisely, allow it, and thus render him as JUST ANOTHER HUMAN BEING, as a miserable man indiscernible from other humans with regard to his intrinsic properties?” (The Fragile Absolute)

For Zizek, what occurs in the incarnation is not the propitiation of sins in the form of a human being or the restoration of the divine image that was lost at the fall (contra St. Athanasius) but the handing over of the world to humans. When Christianity asserts that the divine THING has come in/as Jesus of Nazareth, the THING that is beyond, known as God, is shown to be absent because Jesus is present.

Zizek interprets Jesus as a figure within the symbolic order or the drive/thing/law schemata, wherein the drive toward rest is always directed toward the thing that is supposed to give rest, i.e., God, but such rest is always prohibited from fully resting because of the prohibitions from the Law separate a person from the THING or destination. Jesus, however, traverses the Law and makes the divine present and therein ends transcendence. He makes the destination of the drive apprehensible, thus offering a place of rest and an end to the excess of sin that is produced in seeking the relationship with the divine via attempts at becoming divine. This means that the event of the Christ is not an event that brings one into relationship with the BIG OTHER God. Christ does not do our work for us and pay our debt through his divine threshold of pain. Rather, the incarnation, the coming of God to humanity, is the shrinking of transcendence, is the event that gives us the chance to be free from our excessive quests for the unattainable THING, God, for in Jesus, says Christianity, God is with us.

Zizek writes, “Christ is not the contingent material embodiment of the supra-sensible God: his “divine” dimension is reduced to the aura of pure Schein.” (On Belief 95).

The Incarnation, therefore, is a statement about the end of transcendence into immanent descendence in the Christ figure, Jesus. Jesus, as the incarnation, is not the living apprehension of an ontological other but the dismissal of that Other and the freeing of humanity from its haunting and obsessive quests toward something else. Zizek is basically arguing that freedom from the excess of looking for the THING (God) that is present in Jesus allows a person to love and act ethically. When we are no longer looking for the BIG OTHER, we are free to look at one another as Christ does his disciples. What is most important in the incarnation, therefore, is the possibility to embody agape and to act in loving ways toward others. The power of the incarnation to release one from metaphysical whims and produce a reality wherein there is no Jew, nor Greek, slave nor free, male nor female. No wonder the “Christ was a traumatic scandal.” (The Fragile Absolute)

In reading the incarnation as such, Zizek offers readers an alternative reading of this important theological concept. He offers readers a different kind of incarnation resulting in the adaptation of an ethic of agape that destabilizes dominant worldviews and begins a constructive theology. The incarnation is the event that makes true ethical behavior possible because God is with us…and for Zizek we are therefore released from God. Perhaps the mystics were right. The only prayer we should fully pray is “God rid me of God” so that I can be released to myself and the world…Just as Christ was so released into humanity.

The leading Christian magazine in the United Kingdom, helping you connect with God, Culture and Life