What is Paranormal Christ?

Stown hewn tomb at the base of Mt. Carmel, 1st Century

Google “paranormal Christianity” or simply “paranormal” and see what happens…the perverse core of christian fascination with a reality more than the physical world will immediately become apparent. Our culture is fascinated with what happens “when we die” and where “we” will go when our bodies are no longer full of life. In general, this fascination takes the inquisitive mind in one of 3 major directions: atheism, theism in the form of a structured religious expression or an agnostic embrace of an alternative reality known as “paranormal activity.” Most people fit in one of these three categories, while the most zealous among us argue their “belief” with impassioned rhetoric if little else.
The common denominator of the above is one’s attempt to teleologically define the world; they are not simply offering a view of the world, and especially its aftermath, that is objective. Objectivity is not part of the equation when it comes to thinking our non-existence into a form of paranormal existence. The goal is to tell ourselves a story about ourselves that allows us to engage our current story with structure, security and hope. This is true even for an atheistic persuasion. If the hope one has is an atheistic embrace of nothingness…I would dare say that the atheist is more comfortable thinking the world absent God and God’s relation to the paranormal (irregardless of the plethora of “scientific” reasons for engaging such reflection), than she is including God in the equation for such configurations…at least the atheist hopes this to be the case.
The most striking aspect of this phenomenon is the utter lack of definition being found in these discussions and the apparent either/or, false binary distinction, that gets imputed onto the issue of paranormality. Either one believes in souls or one believes in ghosts. Either one is Christian and believes in some ethereal bliss for all believers like heaven or one is atheistic believing our bodies to be natural compost at the end of their course. A third option is that one may believe in all of it, expressing complete agnosticism toward the issue of the paranormal activity, but being perfectly happy to say “yes” to just about any theory of what the paranormal may be by virtue of the host of probabilities.
Symptomatic of this explosion of paranormality is the universalizing conceptually of what cannot be universalized. One is given “concrete” description of what comprises the paranormal and what the paranormal MUST exclude. The paranormal has come to include a rigid set of shallow criteria rather than truly be a concept of reality that functions at its most basic level: Para-Normal…that which is alongside of, beside, the normal (never mind the host of linguistic and psychological problems that confront a concept of the “normal.”) In other words, we have taken our scientific form of epistemology and subjected the “science” of paranormal studies to the rigid dogmatism of certainty and patterns that typifies science as a discipline and our subsequent ways of apprehending the world as modern and post-modern people. But the problem is…paranormal activity, by its very description, cannot be fully described, totalized or fully understood. It refers to a reality that is outside the norm but somehow also intermingling with it. The paranormal cannot be anything more, or anything less, than the awareness of a unique reality that exists alongside the normal, with the normal, in dependence on the normal, not something that rises above it or is a higher form of existence.  The paranormal cannot be so easily defined, some groups so easily excluded. We need a new operative understanding of the paranormal, especially in relation to faith, belief, religion, and philosophy; one not so restrictive, shallow or lost in cultural fluff.
In fact, as I will argue in this blog and through the multiple kinds of reflection and inquiry that will take place here, the paranormal IS the only description of reality we have…even the reality that we think to be the most empirically concrete form of realness available to our precious little Kantian senses. Notice I did not just say that the “paranormal” and its popular conceptions is our bearing of reality. Nothing could be further from the truth. What I did say, however, is that life is best described in that in-between place of where we know, with where we don’t…what we think, with where ones thoughts originate, what we say, with the genesis of our words, what we experience as “normal” …with that normal alongside all of us that alludes apprehension.

It is this conception of paranormal that I wish to explore and engage at a theological, philosophical, biblical, cultural, psychoanalytic, linguistic, etc, level on the pages of this Blog.

Along the way I will employ the services of books you know, like the Bible, with books you may not know, like Slavoj Zizek’s “Enjoy Your Symptom” or Marion’s  “God without Being.” I will explore orthodoxy in heterodoxical form at points and subject sacrosanct doctrines to linguistic and socially constructive analysis.  This is where paranormal takes on a new life, and our obsession with taming this word is relieved of itself and able to de-center our certainties. 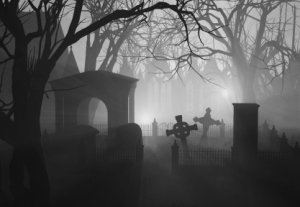 I invite you, the reader, on this journey. Rest assured, this blog will not be passe musings on “paranormal activity” and ghosts and goblins nor will it be fanciful evangelically Gnostic christian reflections on the pearly gates or the streets of gold.  If you search for such bastardazied mystogogy you need to search elsewhere. If, however, you are interested in questing for truth, for virtue, for what is real, and especially engaging these maxims around the centrality of the meaning of the Christ (and all the linguistic luggage associated therewith) then you have come to the right place.  The domain is of philosophical and theological inquiry is not relegated to strictly religious areas because the religious and the secular are always intermingling and informing the other.  Thus, what is at work here is a Renaissance of sorts wherein the world is eclectically engaged via the unlimited nature of its own content.  I’m not totally sure where the journey will lead, but I, like you, hope for the epiphany that can only come through catching a glimpse, and encountering, the most singularly neglected paranormal event to inhabit creation and redefine being as we know it: the resurrected real of the paranormal Christ.

4 thoughts on “What is Paranormal Christ?”

The leading Christian magazine in the United Kingdom, helping you connect with God, culture and other Christians.